It looks like the Renegade craft show has just posted the artist list for Brooklyn. I'm burning with jealousy! I am still on the waitlist, but applying for this show actually helped me to see all of the places where I needed to improve my application, all the important details I left out and the photos I'll need to take. It was the first big show I've applied for this year so it's a good time to know this stuff. All in all, even though I'm languishing on the wait-list, I still think this is going to be an amazing year for me. 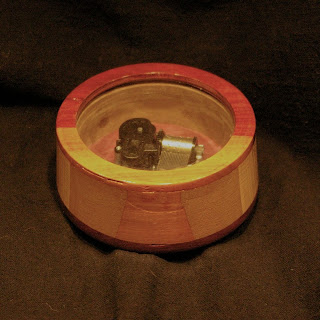 Sometimes you're lucky enough to meet the most interesting people in your wanderings. My favourites are the creatives among us, especially those with the ability to turn a pile of yarn, block of wood, or silence and nylon strings into something beautiful, strange, or exquisite.


Leo Brooks is a percussionist living in Aylmer, Quebec, just outside Ottawa. He has been building and repairing numerous types of drums and xylophones for about 10 years under the banner of his company “Treefrog Percussion”. This year, he added music boxes to the list of instruments he creates, and this is my interview with him.
Why did you choose to integrate Music Boxes into your work?

Well to answer that, you have to know my drums a little. One of the styles of drum that I build, called a Djembe, is made by cutting various sizes of rings out of wooden planks, and then gluing them all together. The inside cuts of the rings are then cut down again into smaller rings which can be used for smaller drums. As far as I know, I am the only person that makes djembes this way.


Some of the planks I use are made by laminating thin strips of wood to create what is essentially a striped plank. I use both domestic and exotic woods, so the resulting stripes vary in hue. There are many shades of brown, naturally, but the exotic woods add colours like red, yellow, black and even purple – all natural colours. Once these planks are planed down to the correct thickness, I cut my rings out of them. The result is that these round pieces show cross sections of the many species of wood used in the plank. Once the whole drum is assembled, it appears as a mosaic of dozens of different woods.
The problem with the process is that there is always a circle of wood left over from the inside of the rings. Because the wood is so beautiful, I have never been able to let myself just throw it away, so I have been keeping it in Rubbermaid bins since 2000, just knowing that I would find something to do with it someday. But the bins were starting to take up a lot of space.

For reasons I don’t recall, the idea to make music boxes with this wood struck me in the fall of 2009. My first boxes were done in early 2010. I have always been fascinated by music box movements, so I think it is a really good pairing with my other work.

What your favourite scene from Alice says about you?

This is nice, HGTV's Design blogger mentioned one of my (favourite) Alice pendants in their homage to Alice in Wonderland inspired design.

In fact I have two Alice in Wonderland music box pendants in the shop at the moment; both Tenniel illustrations of my two favourite moments. The Mad Hatter's Tea Party is one of them (as if you couldn't guess) and the other is little tiny Alice in the forest, asking advice from big, surly, hookah-smoking talking caterpiller. 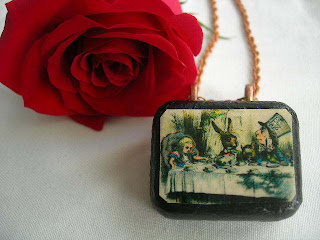 I should probably mention here that if YOU have a favourite scene from the story that you would like to wear, I can incorporate it into a pendant just for you, if you ask me nicely (oh yes, a naked plug right in the middle of the post...hey, a girl's gotta eat!)

How much you can tell about a person from her favourite scene in Alice in Wonderland (and Through the Looking Glass)? Are people who like the Cheshire Cat scene a little bit secretive? If the Queen of Hearts losing her cool on the croquet lawn does it for you, is it possible that you're exceptionally well-suited for a job in Naomi Campbell's entourage? Or does the scene of Alice surrounded by tumbling cards hit particularly close to home (I think it does a lot of us). So, I'm curious to test it ha ha, what's your very favourite scene?


Posted by Ola Silvera No comments: